Static shock can be irritating to downright painful. That’s because when you get shocked from what’s commonly called “static electricity” it’s really high-voltage electricity. Depending on conditions, it can actually reach a potential of several thousand volts. Furthermore, the drier the air, the greater your chances are of this happening.

Static electricity forms whenever the quantities of positive and negative electrical charges in something aren’t perfectly equal. Normally the positives cancel out the negatives, and everything behaves electrically neutral.

From our little science lesson, you can see why in dry weather you can get shocked when you step out of the vehicle and close the door. Your body becomes electrically charged from your clothing (an insulator) contacting the seats and seat-backs (a different insulator).

When you step out, you’re taking just one polarity of charge along with you, while the seat keeps the opposite one. At the same time, the seat is causing the entire vehicle to become electrically charged due to a process called “Faraday’s Ice Pail Effect.” The potential voltage between you and the vehicle now surges up to 10,000 or even 20,000 volts. If you’re wearing shoes, especially those with rubber soles, the charge has no chance to leak to ground. When you reach out to close the door, which is grounded to the vehicle, the opposite polarities rejoin at your finger, and you get shocked.

How to Avoid Getting Shocked

Now that you kow what causes staic shock, here are some tips to help you avoid it:

• Avoid wearing clothing that contribute to static shock. Clothing made from wool or from synthetic materials such as nylon, polyester, or plastic, put a greater electrical charge on your body than clothing made from cotton or other materials. A 1998 study done in the UK recorded peak body voltages of 21,000 volts when wearing nylon clothing, 9,000 volts for wool clothing, and 7,000 volts for cotton clothing. Also, consider choosing leather upholstery instead of fabric. Fabric upholstery creates a greater charge imbalance than leather does.
• Shoe soles create a charge imbalance and work as insulators as well. To avoid getting shocked, don’t wear rubbersoled shoes. They create a significant charge imbalance, and when you step out of the vehicle, the insulating properties of rubber keep the charge from leaking to ground. Try wearing thin, leather-soled shoes instead.

Join me and HondaPro Jason for Honda Blab #002 on 2/29/16. It is being held at a special “after dark” time of 9pm EST. Sit back and watch for free or participate by text and/or video by simply logging into blab.im with your Twitter account. Video seats are limited so if you would like to participate via webcam send us a message on our Facebook page.

The all-new Honda Ridgeline debuted live from the 2016 North American International Auto Show in Detroit on January 11, 2015 at 1:15 p.m. 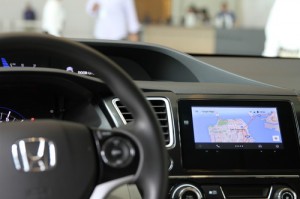 In an announcement from Google’s annual developer conference, Honda vehicles will be featuring Android Auto for 2015. This system provides a seamless connection between compatible Android phones and Honda’s in-car connectivity systems.

To initiate the system Honda drivers will simply connect their phone to the vehicle’s USB port. This will allow them to access supported apps and features using the car’s in-dash display and voice controls.

More details about Android Auto and compatible Honda models will be announced at a later date. Stay tuned.

OEM or Aftermarket? Rubber mats or liners? $100 or $200? There are so many questions that come to mind when looking for all season protection. Unless you have completely given up and put bath rugs in your $30,000 car we have put together some pros and cons of the most popular all season options out there. Hopefully this information will help you decide on which is best for you. All of these options are available on our web site or by special order.

Pros: Made by Honda for your Honda, affordable, cut specifically for your model year, Honda logos provide an custom look, good warranty, made in the USA.